Viral videos circulating on the internet purport to show poll workers in Delaware County, Pennsylvania, filling out blank ballots as the state continues to count votes critical to determining the winner of the presidential race between President Donald Trump and Democratic presidential nominee Joe Biden.

But the county has provided an explanation for what is going, and Reuters, PolitiFact, and USA Today have all found the allegations of fraud to be false.

One video shows a male poll worker in a black shirt appearing to fill out ballots and stamp them while he is sitting across from a female worker who is wearing a grey sweater. Two other female workers can be seen sitting next to the pair at a nearby separate table.

A second video shows one of the women at the second table filling out ballots.

Delaware County responded in a press release, confirming that the footage was recorded on its official live stream while saying that the viral footage had been “altered” and that “some residents” are “making false accusations” about what the video shows. The county did not specify which video was allegedly altered, but it did point out:

The actual video shows the election worker at a table with other coworkers in a room full of people with bipartisan observers a few feet away at each end of the table, closely observing the worker from approximately 6 feet away. This arrangement was agreed upon between the Election Bureau and the former Republican Chairman of Delaware County Council, acting in his capacity as counsel for the Delaware County Republican Party.

The county shared a screenshot showing the same workers, and the observers monitoring the process. 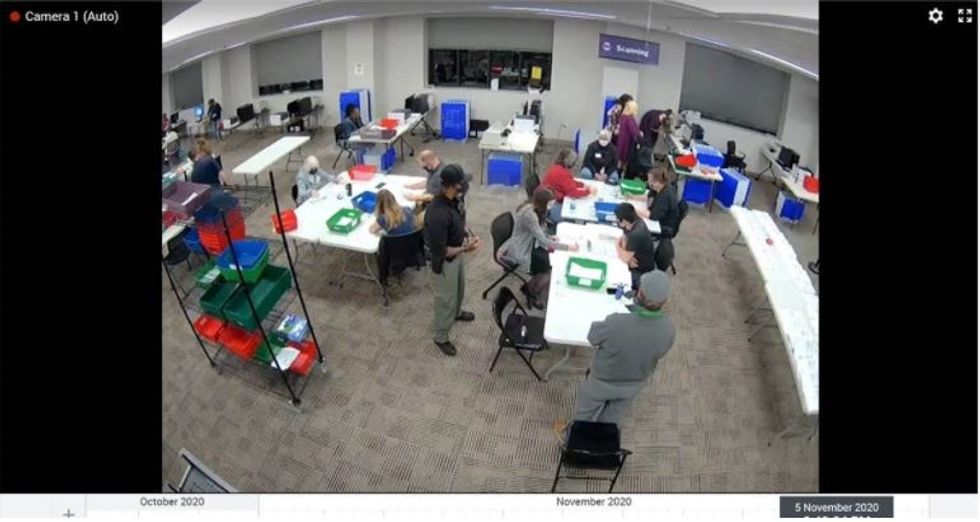 During the processing of ballots, a machine extractor opens the ballots. Some ballots were damaged by the extractor during this process in such a way that the ballots could not be scanned successfully. According to the scanner manufacturer, Hart, the best practice to deal with damaged ballots that cannot be scanned is to transcribe the votes on each ballot to a clean ballot and scan the clean ballot. In accordance with that guidance, the Chief Clerk of the Delaware County Bureau of Elections instructed elections staff to manually transcribe the damaged ballots. As ballots were being transcribed, the original damaged ballots were directly beside the new ballots and bipartisan observers witnessed the process at close range. Damaged ballots have been preserved.

A third video also taken from Delaware County’s live stream shows an overhead view of a different female poll worker filling out ballots while sitting directly across from a male worker wearing a long-sleeved plaid shirt.

The woman can clearly be seen filling out several ballots and stamping them, as a man narrating (while viewing on a computer) can be heard saying, “This lady is marking the ballots. I filmed her a half hour ago doing six, and she’s still working at it.”

This is an excerpt from TheBlaze. For the full version, click here.

Please log in again. The login page will open in a new tab. After logging in you can close it and return to this page.